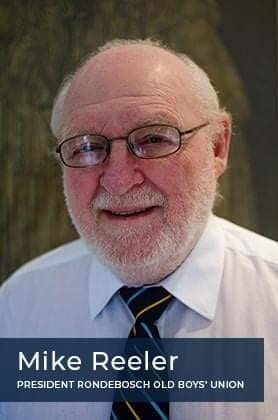 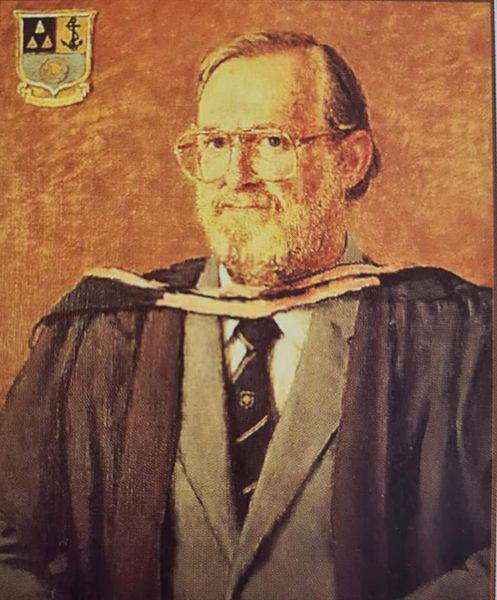 It is with great sadness that we learnt of the death this afternoon of Mr Michael Reeler, Rondebosch Boys’ High School’s Headmaster from 1977 to 1985, and President of the Old Boys’ Union.

Mike Reeler’s involvement with Rondebosch extended over 64 years as an excellent and much respected teacher, boarding house master, sports coach, Vice Principal, Headmaster and President of the Old Boys’ Union.

We extend our condolences to Mike’s children Susan (RBHS staff), Antony (E1981), Bryony and Christopher, to the Reeler, Carletti and Poulter families and Mike’s many friends.  Mrs Lesley Reeler died in 2016 and is remembered with fondness by generations of Rondebosch boys and their parents and staff for her loyal and caring service to Rondebosch and Canigou over many years.

Mike first arrived at Rondebosch in 1957 as a student teacher while studying at UCT.  His teaching qualities and keen and incisive mind made such an impression that he was appointed to the staff in 1958 to teach pure chemistry, physical science and mathematics.  He was an inspirational teacher and his classes had a warm and friendly atmosphere.

Perfectly at ease with the boys and other members of staff, he was an ideal housemaster at Canigou and The Lilacs, and was also at different times the Head of Canigou, Mason House and The Lilacs.  He is the only person in the history of Rondebosch to have been head of each of the three boarding houses.

He coached rugby, hockey and cricket including the First XI, was Chairman of the WP Schools’ Cricket Union and served as a Nuffield Cricket Week selector.  He was also a cadet officer and took part in the school choir.

Outside of the school Mike was Chairman of Constantiaberg Round Table, President of the South African Teachers’ Association and was active in church affairs at St Paul’s in Rondebosch.

He became Vice Principal of Umtata High School in 1966 and returned to Rondebosch three years later as Vice Principal.  His outstanding qualities were evident and in 1970 became the Headmaster of Settlers’ High School.

He was appointed as RBHS’s seventh headmaster in 1977 at the age of only 40.  Having taught at Rondebosch he was well placed to understand the school’s qualities, values and challenges, and was steeped in its traditions.  He ensured the preservation and strengthening of the best of these.

The High School saw many changes during his tenure.  Extensions to the school buildings nearly doubled the size of the school.  The War Memorial Library (Societies Room) was expanded and the Mears Centre was built making it possible for the matrics to write their examinations in a single venue and for indoors sports such as basketball, volleyball, badminton and indoor hockey to be introduced.  He realised that sports at Rondebosch must provide for boys of all skills, some of which were not catered for by the other established sports.  Many boys were influenced by his enthusiastic and well balance attitude to sport.

At the academic level, examination results improved dramatically during his headmastership. He encouraged the development of Art and introduced Graphic Art; as a result about a quarter of the boys in the school took some form of Art.  The Science and Cultural subjects held their own and Drama grew stronger.  The annual Standards 6 to 9 prize-giving was moved to the beginning of the following year so that academic honours could be seen to take precedence over all others.

He and Mrs Reeler lived in Canigou where, in addition to Headmaster duties, he was Superintendent of Boarding and Mrs Reeler was the Chief Matron through to 1982 after which they moved into the renovated Clarke House.

Mr CJ “Tickey” de Jager wrote of Mike “He had a genuine interest in other people and the gift of a warm and lasting friendship.  In all that he did he was promoted by an instinctive and unfailing good-heartedness.  His outstanding quality as a headmaster was his ability to draw out the best of every member of staff as well as the boys he had to deal with, using their talents and abilities to develop themselves”.

Regrettably with the onset of diabetes Mike felt compelled to step down from the Headmastership in 1985.  He continued his distinguished career in education as a Deputy Superintendent in the Cape Education Department undertaking research and also served as director of the South African Teachers’ Association.  In his book on the history of Rondebosch, Neil Veitch (E1963 & RBHS master) observed that “The large number of people who knew the Reeler family well guessed confidently that their departure from Clarke House and the School would be in a physical sense alone and their attachment to the RBHS community would remain indissoluble.  So it has proved to be”.

With his immense knowledge of Rondebosch and having known large numbers of Old Boys he was the ideal person to be editor of the Old Boys’ Union newsletters, a task which he undertook with passion for several years.  His contributions to the school community continued by serving as a Trustee and later Trustee Emeritus of the Rondebosch Boys’ Schools’ Education Trust.

Mike occasionally commented that one of his greatest disappointments was that he was not a Rondebosch Old Boy. He was however proud that he was an Old Boy of our sister school, Rustenburg, which he attended at age 6 and 7 along with numerous other boys.

In recognition of the immense contribution he made to Rondebosch, the old War Memorial Library was renamed in his honour in 1990 and on its further physical expansion to accommodate the High School’s Music Department the complex was named the Reeler Music Centre in 2014.

In his tribute to Mike on his retirement from Rondebosch, English master & Old Boy Tony Eaton concluded with Mark Antony’s words “There’s a great spirit gone”.

Mike Reeler had a great love for Rondebosch and its people.  His loyalty, insight and knowledge of the school and Old Boys’ Union will be greatly missed, and he will be remembered and honoured by all those who knew him and benefited from his wise and exceptional tutelage, and inspirational leadership. 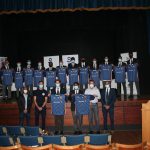 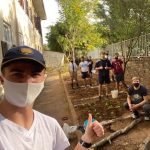